I graduated from Connecticut College with a BA in Studio Art and Art History.  I went to graduate school at Cal Arts­—where I received my MFA—primarily because both John Baldessari and Douglas Huebler were teaching there at the time.

My first group show in NYC was at the 303 Gallery—when it was actually on 303 Park Ave.  My second group show was at the original American Fine Arts Gallery when it was on East 6th Street.  While living in BedSty, Jamie Wolfe, a Connecticut College friend and the owner of the Wolff Gallery, suggested I show my work to Tim Greathouse.

I had my first one-person shows, concurrently, at the Greathouse Gallery, in the East Village, and the Craig Cornelius Gallery in the “photo district” on Broadway and 21st St., in September of 1987. Both shows were reviewed in the now defunct Arts Magazine and in Art in America.

The last gallery that represented my work was Parker’s Box Gallery in Williamsburg, Brooklyn, where I had three one-person shows, two of which were given short reviews in the New York Times.

I moved to Saugerties in 2013, and after installing heat started living here full time in 2014.  I started the construction of my studio in 2016, finished sometime in 2017, and after at least a good ¾ of a year of rest, once again began making art. 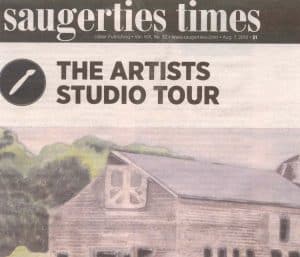